The kitchen was a mess, and I had avoided this intervention since day one. I swear I used the sink with my eyes closed for the first month. Before I even pulled a line, I knew there was a severe sag in the countertop. There turned out to be a one inch dip in the middle, for no obvious reason. The only solution seemed to be yanking out all the cabinets, and reinstalling them. I bit the bullet, and removed the cast iron sink, only to find the original cabinet had been previously butchered. I would spend the next couple days trying to rebuild the base and level out the 12' run for the new counters. 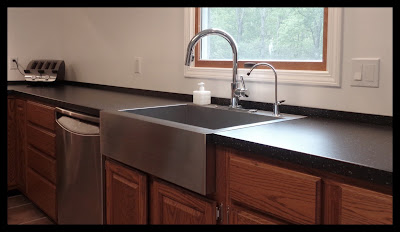 We chose to replace the original delaminating countertops with a black mineral effect laminate from Ikea. We were nicely surprised by the finish, and even more impressed by the $240 total cost for our project.
The surface is lightly textured and looks better than the smooth surfaces at the big box stores, even five feet away it could pass for manufactured stone. The whole kitchen took four, 6' sections. The island was a perfect swap out, with instant gratification. The rest would take patience and precision to achieve the desired results.
Once the sink base was reconstructed, it magically resolved all the leveling issues and only took one small shim. Much relieved to not have to take apart the whole kitchen, I started test fitting the countertop slabs. The overhang on the front was too deep for this dated style of oak cabinets. Because the walls were fairly true, it made sense to rip a half inch off the back edge of all the pieces. By accident, I realized the waste strip would look sharp as a shallow backsplash. We had opted to hold on installing the full tile backsplash for budget reasons, not to mention the walls had just been fixed and looked great.
Another trick I learned when finishing dark laminates is to stain the thin, raw edge revealed on the end piece overlays. Typically the base material is a medium brown and it detracts from the overall appearance. Guide the broad edge of a new, black Sharpie over the edge at a 45 degree angle. Immediately drag a paper towel over the wet marker line and it will buff out to make the ends look seamless. If you make a mistake, use rubbing alcohol to clean it up.
The rest of the kitchen still needs the finishing details fleshed out. Knobs and handles, as well as the floating shelves will be added soon with before & after photos on the way. There will be several more related posts that cover the individual components of our economical reformation.
Email ThisBlogThis!Share to TwitterShare to FacebookShare to Pinterest
Labels: DIY, Experimental, Home Improvement, Ikea Hacks, Kitchen, Tips and Tricks