Normally, I would not have written about this ordeal, but I gained so much misinformation from trusted sources that I needed to clarify for anyone searching for similar answers. The question, can you safely change your factory alloy wheels from one car to another? You may be surprised by what I found. 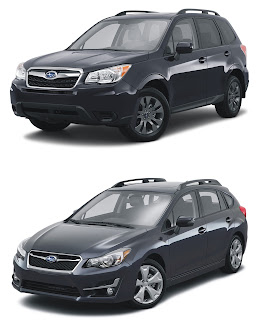 I recently upgraded my grocery-getter to a 2016 Subaru Impreza. My wife had already picked up her 2015 Forester before leaving Montana, Yay no sales tax! The newer Impreza was at the limits of our budget and left me with little money for the silver rims I wanted. We scoured eBay and junk car sites trolling for a set of "lightly used" stock rims to replace the set that came with the car. This proved to still be too expensive, not to mention a little sketchy.
I really like the style of the wheels that came on the Sport edition Impreza, but the graphite color really clashed with the dark gray body color and made me like the car less. After chewing on this for several days with no real monetary answer, it struck me to check the Forester's dimensions, and sure enough all the specs were identical across the board with the exception of color and style.
Me being as thorough as I am, I wanted an authority to sanction the swapping of rims from the Impreza to the Forester and vice versa. Now the actual tires needed to stay with the vehicles because they are different sizes, and not compatible. This prospect proved to be trickier than I thought.
My local Subaru dealer barely listened to my question and shot it down because it required more than five seconds of thought. They claimed that the calipers would be in the way, laughable, did I mention the rims are the exact same dimensions? Next, a National parts supplier gave me a pan legal response that it was not a good idea because cars are designed with specific wheel diameters which affect speedometer, and odometer reading as well as vehicle control. Great, but did I mention the OEM tires would stay with the vehicles?
My local warehouse club also got weak-kneed when their computer said they were not allowed to do the swap. I went deep into forums discussing similar issues and found little expert guidance. I did notice that the same rims on my Impreza were used in the late 1990's on a Legacy Outback and other stock alloy rims had been used interchangeably between models over the years.
Finally, I stopped at a couple local tire shops looking for someone to just try it. Both shops were willing to at least try and saw the matter clearly. Within a half hour both cars were off the lifts and my expense was the mounting and balancing for eight wheels. So yes, you can move whatever wheels around you want as long as the diameter, width, lug pattern and offset are identical. The other reason for me to be this thorough was that both cars are still under warranty and I did not want to give anybody a reason to pass on any future, covered repairs.
Email ThisBlogThis!Share to TwitterShare to FacebookShare to Pinterest
Labels: Experimental, Tips and Tricks, Toys