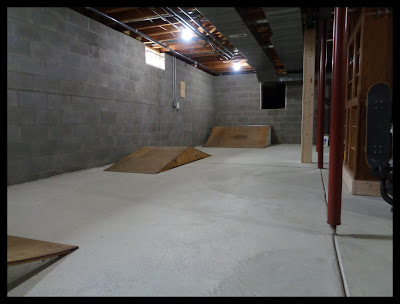 There was a tough decision to be made when we moved from Montana back to Ohio. What to do with my beloved, garage mini ramp? After some half-hearted attempts at selling it, I could not bear the thought of leaving it behind. Although we did not know what sort of house we would end up with, I hoped for the best and paid for the extra space on the moving truck. Unfortunately after all the effort, our new garage just could not house the beast and even after trying to alter the geometry, it just would not work.
Right before winter I disassembled my good friend and stored the wood in our unfinished basement. My two sons are just starting to pickup skating and I wanted to give them something that I could have only dreamed of as a teenager. A place to grow their skills and skate year-round in any type of weather. Our closest park is about twenty minutes away, forty-five round trip, which doesn't cut it on busy Dad days. So, I set to work using the materials on hand and a new course layout for the L-shaped space.
Their stature makes smaller ramps perfect for them, I however want to skate too, so it took some deep mental negotiations to arrive at the best compromise considering the 8' ceiling height. I decided to go with 2' height for the quarters with 6' radius transitions. Still peppy enough to have fun and fly around the small park. I even consulted a professional ramp builder that suggested I could go even higher because of a skater's tucked riding position on tranny, but I did not like the idea of not being able to fully stand up on the quarter pipe decks. 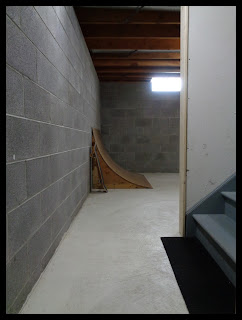 After completing the two bookend ramps, I still had a large pile of leftover scraps. I built a wallride for me with a very tight 3' radius. The floor joists drop to 7' clearance in this section, so I wanted an obstacle to absorb energy while still being a fun way to route yourself back to the main park. This left me with just enough wood to finish a pump ramp for the center of the long side. I decided to mimic a heaved sidewalk with a round top, an obstacle I had wanted to build for awhile.
As sad as it was to toss the old transition templates, I see the beauty in the new park. The masonite, plywood, lumber, and steel coping are now a part of the fifth build using these materials. For this reason, the park shall be named "MARK V" in honor of their legacy and design evolution. The skatepark has proven to be a much better use of space than the sad pool table that was left behind, and a great way to wear the kids out on a rainy day.

I would like to see pics of the kiddos skating it up!