Does laziness breed invention? It does not sound like it would. As easy as it is to swap out light fixtures, I have already installed a lifetime's worth. This discussion of invention revolves around the bare bulb lampholders throughout my unfinished basement. The ubiquitous pull-chain light socket that inevitably fails when rushing to some emergency in the nether region of your home. 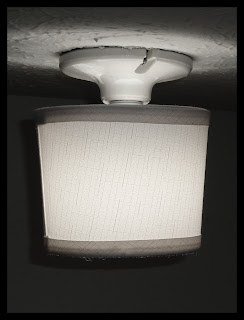 All drama aside, it would be nice to come down to this storage area without being blinded by the rather intense, naked LED bulbs. I had already taken the time to install a switch that controls all six porcelain fixtures on the same circuit. Much nicer than fumbling about to manually turn each light on. Still though, this just instantly activates the severe lighting, emphasizing the problem further.
I could have installed simple flush mount lamps with plastic globes like I have before, but this is an additional hassle and twice the expense. While looking at interior lighting at Lowes, I spotted a simple shade meant for candelabra bulbs. They would not work out-of-the-box because the bulb clips were too small, but I felt it was worth pursuing because of the aforementioned reasons.
Initially I planned on bending the wire or trimming it to fit a larger bulb, but the armature's welds were feeble and they kept snapping off. After a minute of frustration, I decided to use this to my advantage and easily gutted all the shades. All I had to do now was cut my own hanger out of scrap wood. A simple rectangle with a hole in the center for the collar of the bulb and the mission was accomplished. The result is a simple shade that diffuses the light and installs as easy as screwing in a light bulb.

Your solution is just what I am looking at for my basement lights, how did you attach the wood collar to the shade? Any pitchers?

The piece of wood was a simple rectangle shape with a hole in the center. The hole is big enough to allow the bulb's base to be inserted through it before threading it into the fixture. The wood hanger was just big enough to friction fit inside the top of the shade. I rounded of the two ends of the wood enough to match the circumference of the shade. No glue or fasteners needed. Important to note, these are low wattage LED bulbs which produce very little heat. I would not do this with traditional incandescent bulbs for fear of creating a fire hazard.


Thanks for your interest and good luck!

Thanks for the info, I kind of thought that was what you did.