Catwoman Has No Tail

My wife and I, and our entire generation grew up on the classic Fisher Price Little People. Now, I am not talking about the obese version that is currently available. Even though the scale of these figures reflects our enlarged culture, the playsets are dull and lack the dynamic quality of the original 1970's toys. It was only natural that when I became a parent, I would look for a similar toy to enjoy while playing with my toddlers.
The Duplo of my generation was blunt and simple, I am sure to avoid being a choking hazard. The Duplo line has really stepped up in recent years to fill this void in the world of preschool imaginary play. The new generation of Duplo has scaled up the smaller blocks from the LEGO City series and this greatly improves the construction possibilities. As a parent this buys me time before moving my oldest son into the more advanced tiny bricks, while allowing his younger brother to play with him. 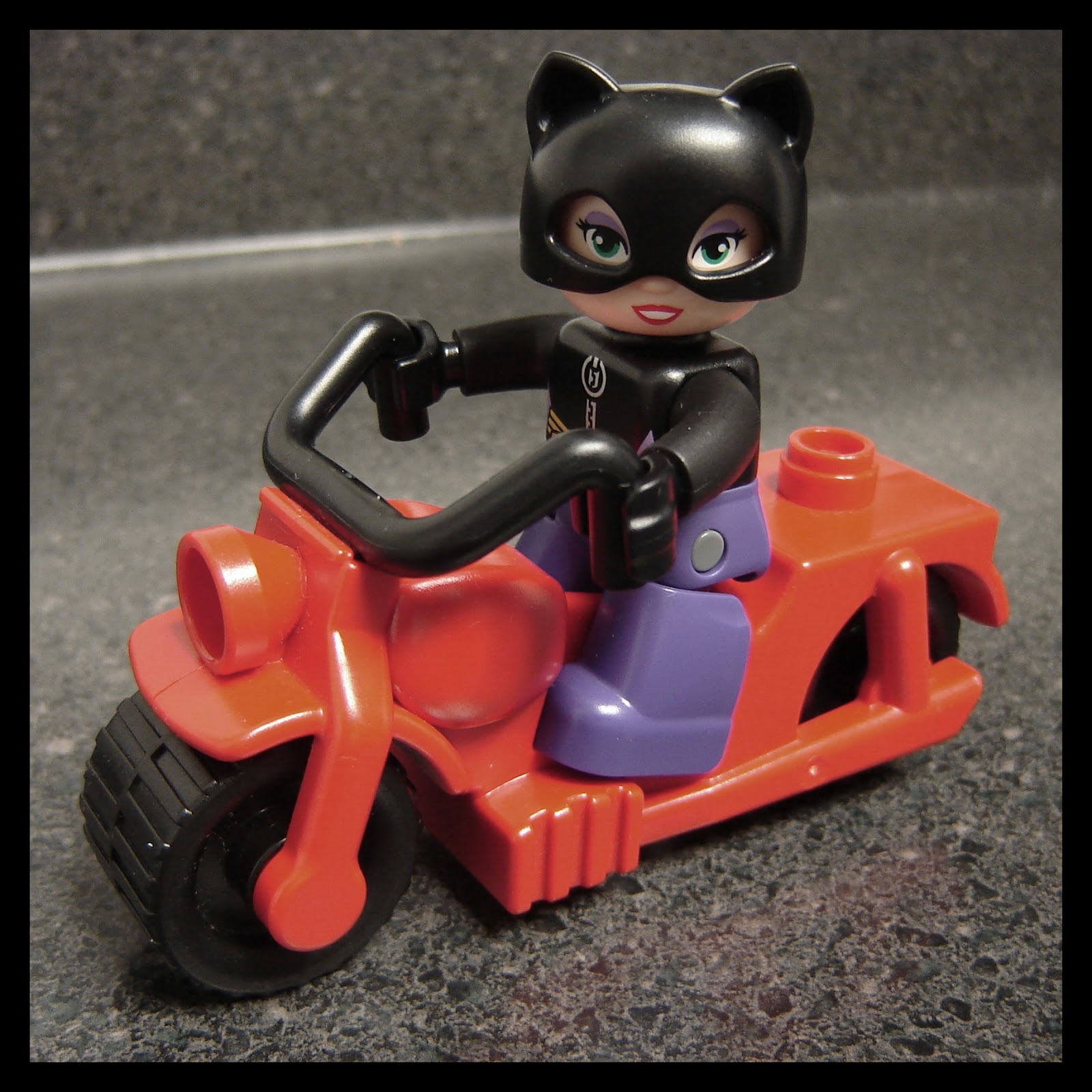 Now with all the love bestowed upon the Danish company, they really let my little guy down with The Batcave Adventure set 10545. Hell, I was even excited to see this offering and decided to buy it well before Christmas. The set is great except that Catwoman has a molded plastic tail that greatly restricts her using any vehicle. That includes the Batwing that comes with this set. Unfortunately, Catwoman was soon relegated to the tote of bricks and forgotten about.
Anyone that reads this blog regularly knows that my mind will not let stuff like this go. I mean she is a really cool figure and an integral part of the pretend scenarios of this set. The simple answer was to lop off the tail with a plastic saw, but this is not graceful enough for a Manic Maker hack. I looked through the tote and found "Izzy" from set 10513. She was never really popular at our house and she had the perfect set of pants for Catwoman. I was pretty confident that the little grey pin in her hip held her entire figure together. I tapped it out with a dull nail, the torso disengaged and presto, Catwoman now has matching purple pants.
Man, my three-year-old thought I was the greatest Dad ever. Catwoman is now in constant play and I really cannot figure out why they designed her with a tail that restricts basic movements. It may have been the collaboration with DC Comics, but LEGO has never dropped the ball in this way before. I still recommend the set, and maybe with this little tip you can be your kid's hero too.
Email ThisBlogThis!Share to TwitterShare to FacebookShare to Pinterest
Labels: DIY, Experimental, Family, Tips and Tricks, Toys