The dust was the craziest I have ever seen, layers as thick as craft felt came up with the vacuum detailer. The Craigslist pictures were horrible and I am guessing this is why there were no takers. It could also be the fact that these old analog gems weigh several hundred pounds, and are awkward to move at best. I committed and hauled away my new grimy prize, an old Wurlitzer organ with a built-in Orbit II synthesizer as a bonus.
These home entertainment centers were significant investments when they were new, and I worked on the assumption that it had to be serviceable and the workings completely accessible. Once the back and top of the cabinet had been removed, I found tall hex bolts that release the chassis and each level then pivots up like a car hood.
﻿   Soon I was starring at a beautiful array of electronic glory, I would never be able to decode the tangle of multicolored wire harnesses. There are also massive, exposed capacitors on the amp head that scream, "instant death!" I stayed true to the mission, cleaned up the filth and got out of there ASAP. A couple keys were dead, but I was able to repair the broken actuators with toothpicks and super glue. 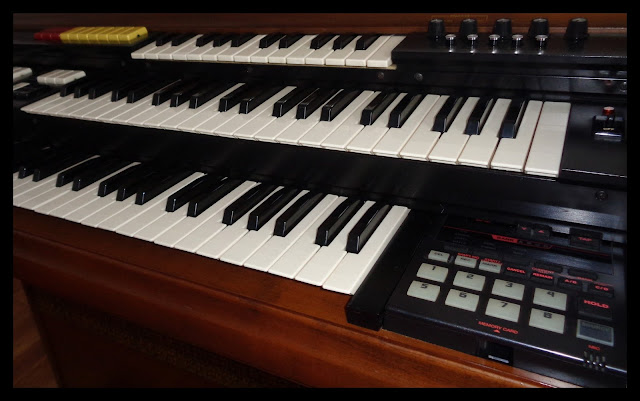 Now to the meat of this mod, this particular model 4270 also had a built-in tape recorder. Unfortunately the heads were so fouled that it only made horrendous, scratchy blasts through the speakers. At the very least I needed to disconnect this unit to keep my kids from driving me nuts. As you may know, little boys love this sort of loud nuisance to rankle their parents.
With all the layers opened up before me, I was further intrigued to see the internal sound ran through RCA inputs on the amplifier. My subconscious went to work and I soon came up with an interesting idea for a swap out. I was able to try several effects pedals patched in line to the amp. There were many options at this point, but I kept coming back to an old Boss SP-202 sampler laying around unused. I also noticed the tape deck had a similar foot print as the sampler, and there was room for a power supply to run off the internal outlet. With minimal work, I got the old Dr. Sample to fit and run cleanly into the amp.
Now the kids' favorite part is to make loops and other goofy sounds with their Wurly. In a modern twist, the sound signal runs through the sampler, much in the same way as the original tape deck functioned. The exploratory cleaning also revealed a headphone jack on the underside of the keybed. This allows me to run a standard cable to my guitar rig for loads of additional hijinks. As unwieldy as these instruments are, they still deserve our attention and the respect of a proper home.
Email ThisBlogThis!Share to TwitterShare to FacebookShare to Pinterest
Labels: DIY, Experimental, Family, Guitar, Tips and Tricks, Toys