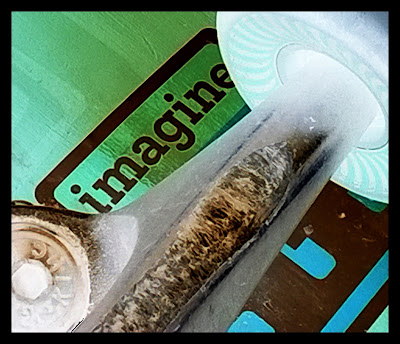 Upon returning to Cleveland,, I began searching for concrete skateparks, but the online skate directories were spotty and dated at best. I now feel comfortable saying that I have experienced the extent of what Northeast Ohio has to offer, and after riding nearly twenty different skate destinations, the report for the Cleveland-Akron area is now complete.
I will admit that I have been spoiled by Montana's Dreamland and Grindline built parks. In Northeast Ohio there are very few honorable mentions for this caliber of concrete park.

Here's the nitty-gritty with the prefab alternatives, they have been mostly neglected and I imagine will ultimately be removed once deemed unsafe. As an adult, I see the bigger picture of bureaucracy and the lack of public will to fund the necessary maintenance for these facilities. We are now experiencing the fading boom of prefab skateparks from the early ought's, so any locals reading this, grab your Bondo, cordless drills, and get to work, you have been warned. Okay, enough of the politics behind these public parks, you want to go skate, so check the list of my top favorite local spots.
There was some reluctance on my part to release the fail list, I did not want to be seen as a hater, I love skating and am happy to have some skate-designated concrete nearby. Any park can be fun, especially if it is your local park just down the street. However I purposely excluded the following parks because of deterioration, bad design or both: Akron, Aurora, Avon Lake, Bedford, Brainard, Brecksville, Cuyahoga Falls, Mayfield, North Olmstead, North Royalton, Stow, and Streetsboro.
Let me be clear, my position all along has been to find a workhorse of a park, one that is well constructed with good flow, while also being a reasonable commute. Cleveland is a blessing and a curse, there are a lot of skating options within driving distance, but it also means a lot of driving just to skate. So save your self some time and start with the six listed above and visit the other thirteen if you are adventurous or like skating precarious spots with downright sketchy equipment.