For many years, landscaping and skateboarding kept me fit, but now I am in a losing battle. I can tell that I am out of shape and this is a direct result of zero free time to exercise. I have been searching for some form of cardio to add to my limited workout time, something I could do while the boys take their afternoon nap. 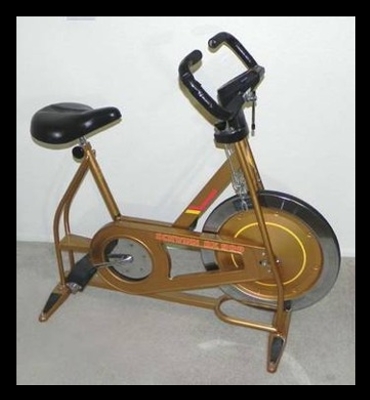 Reflecting back to my overweight youth, cycling had helped me shed the weight in the past. A stationary bike made the most sense for my situation. So with this logic, I headed out to our local thrift stores. I was feeling pretty defeated after leaving the first two stores, then we made a last minute stop at our least favorite secondhand shop. Bingo! a really nice, vintage Schwinn fixed gear bike. I laid down the twenty dollars without a second thought and dragged it to the car, literally, it is very heavy.
I knew it needed a little love, but the ride felt really nice. I decided to set a budget of $60 dollars for new parts. The computer no longer worked and after an hour of trying to revive it, I had the epiphany to just buy a new road bike computer for $10. I was able to use the original sensor and splice it into the brain's harness. This was well worth the investment because of the motivational metrics such as speed and distance ridden. 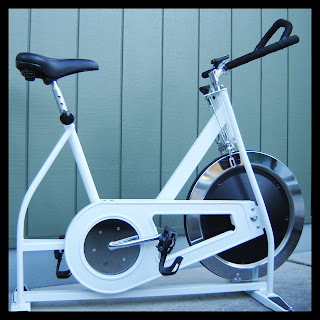 The stem was sloppy and I was concerned about stability when leaning forward. This got swapped out as well as the busted seat and pedals. After the parts had been ordered and the decals removed, I just could not make peace with the vintage bronze paint job. I chose to go ahead and paint the bike white, I had to remove the cranks to grease the bottom bracket anyways.
The last touch was some craftiness from my shop. I had a set of MTB handlebar extensions that I wanted to add in order to take advantage of different riding positions. When assembled, they left a small, awkward gap in the middle. I headed to the box store with a vague idea, and came back with a 45 degree - 3/4" copper elbow that was a perfect union.
Why would anyone spend time and money on a project like this? Well, we have a small house and aesthetically, I will have to live with this bike in my space. There is little difference in performance compared to the trendy spin cycles which are several hundred dollars to start with. I was able to breathe new life into a gym-quality bike that will now ride on for another generation.

My DX is my baby. I have had mine for almost 20 years. I was fortunate to have the nice silver and chrome ones. I have also made mods to mine with new shoe pedals and computer. I find that it is one tough cookie. This thing has yet to break on me and in just now going in for its first teardown. Which has me a little anxious. It is about the closest thing I have found to a road bike. In stationary form. Without the gearing. It feels like a ride.

Hello!, We have a DX900 upright exercise stationary bike. We to replace the
original brake pads. We haven't had any luck. A seat that would fit the post, would
be nice too! Our DX900 bike is like your picture gold color. We purchased it in 1988. Where did you order parts for your bike. We would like some information.
We have looked all over the Schwinn websites, and other companies, but haven't succeeded, Can you help us? Thank you!

Hi Anonymous, I hope the post has been inspiring. A lot of the parts are common bike parts, and a local bike shop should be able to help find replacements. Just make sure you take the individual pieces for them to match.

There were subtle variations between model years, I was able to buy a new seat with an older style clamp and mounted it to the existing seat post. The friction / resistance pads will be hard to replace. If you still have the originals, I would try to remove the worn felt pads from the plastic glides and replace with new adhesive-backed felt from the hardware store. I hope this helps, enjoy the bike!

I am buying one today that also needs a little love, but like you I wanted something of high quality and dependability and would rather fix it up a little and have it ride on for another generation! Thank you for your post I can't wait to go pick mine up after work!💝

Did you use spray paint?

Hi Amanda, The bike is relatively simple, and easy to disassemble. To answer your second question, I used gloss spray paint and was pleased with the finish.

If your bike runs smoothly you might get away with just masking the parts you do not want to paint, and skip breaking down to the bare frame. The flywheel is the heaviest part of the entire cycle, so be careful if you remove it. The cranks and bottom bracket can be tricky to put back together, your local bike shop could help with this. Best of luck with the project, it is a solid ride and well worth it.

Unknown said...
This comment has been removed by the author.
10:51 PM

Thanks for the advice 😬

However, it's the work out programs that really impress. There are 23 in all, including 1 Manual, 2 Custom, 3 Heart rate, 10 Profile, Calorie Objective, BMI Measurement, Time demo w/ pacer, Recovery Check, Results Mode, Fitness Analyze, Quick Start. Unless you're going and look at very expensive models, you aren't going to find a machine with such a comprehensive set of workouts. Best Recumbent Stationary Bike

Hello All, I too was gifted a schwinn dx900. I purchased a new saddle at Walmart, for 22 dollars that was as wide but much cushier. Schwinn brand, believe it or not. fits on the standard seat post, and you can adjust the seat fore and aft and tip up or down like a regular bike seat. made a heck of a difference. There is a guy on the internet that I sourced brake pads from, Fitness Graveyard. the new brake pads are a bit different than the standard ones, but they fit fine. they are not as tall but are wider. they are fine. I am still using the ones that came with the bike but have a set of spares. I took off the straps on the pedals and used some standard metric nuts to use the standard pedals it came with. then I took a water bottle holder drilled thru the frame and mounted it. The handlebar stem is a bit wobbly no matter how hard I tighten down the stem, but it works great. Cleaned and waxed. It is a bit noisy but so what. It is a great ride. Looking at another now for my office. May have found it, but he wants 85 dollars, may make him an offer. This one is white. but looks to be dusty, dirty, but complete...