I would like to act like the driveway project was spontaneous, and I was somehow sticking it to an anonymous group of teenage, street-racer thugs, but that is not the case. Yes, they were the final straw, but I had already invested a significant amount of time designing the surrounding landscape while considering all the possibilities for the failing asphalt.
Even with a pretty good idea, I will wait and let my subconscious process the details for as long as possible. I devoutly believe in the "back burner" thought process, and I have witnessed the benefits with every major modification to our home. At this point, I can attest that it has paid off with better design and engineering, versus bullying through with my first broad, initial impulse. 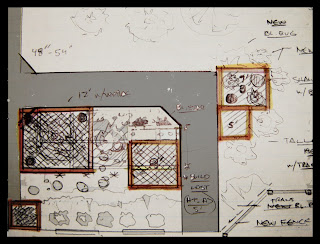 As mentioned before, the perimeter of the new walkway was laid out directly on the pavement with Sharpie markers. This turned out to be an essential part of the creative process. There were no true right angles to base my geometry on. The edges of the asphalt had severely degraded and I had to approximate where to start my straight runs and then adjust the dimensions accordingly.
I soon came to realize that by eliminating the semicircle driveway, it united two large sections of evergreen shrubs which had been independently cultivated. It would turn out to be the unifying solution that I had not have foreseen years earlier.
Up to this point, we had slowly cut back the original plantings trying to find the underlying organization. Thirty-five years of thoughtless additions with inadequate upkeep had rendered the property's landscaping an eye sore. The sea of river rock was buried in detritus slowly turning into mud. Countless weeds and knee-deep dead juniper aside, there were some redeeming qualities such as mature, healthy trees. Little did we know it was going to take hundreds of man hours to achieve the needed clarity.
One of the previous upgrades from a few years back were the raised beds. It made sense to build upon this design element and continue it around the to the front of the house. These beds also visually reinforce the fact that there is no longer a quick turnaround for wayward motorists.
I had no idea that when I embarked on this hefty, dramatic change, that it would ultimately bind together the last six years of hard work into a cohesive package.