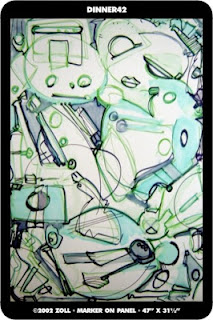 While living in Cleveland, I happened to start doodling on a Vika Amon table top in my studio. One thing led to another, and I soon realized that these lightweight panels were the perfect substrate for my new drawings.
Up to this point, I had been building my own panels for painting out of stretchers and masonite. They proved to be heavy, time consuming, and still needed priming. The white Amon table tops were laminated hollow core panels with a thin, extremely smooth finish. I was able to use a variety of mixed media with satisfying results. The only prep necessary was for acrylics, which required hazing the gloss surface to improve adhesion. 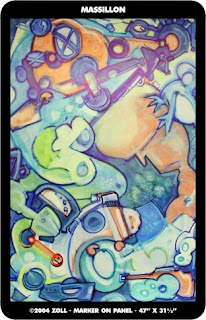 Now that I was happy with the outcome, I needed to figure out a better method to hang them. The panels had a solid backing and it was tricky to get a flush-to-wall installation. I initially used rubber bumpers to get the necessary clearance for traditional D-rings and hanging wire, but this was more complicated than I desired. I set to work experimenting with a damaged panel and derived a very simple pattern consisting of two vertical holes on the center line. This allowed for the panel's solid back to act as a hanging bracket, while the second hole gave clearance for the OOK wall hanger to nest inside the panel and remain hidden from view.
At the time these panels were around $25 apiece which allowed me to cycle through several at a time with out sweating the price. Even though the Vika Amon is no longer available, the Linnmon appears to be similar in price and construction. I really enjoyed working on these surfaces, and it was an important period of my evolution as an artist. The only thing that would pull me away from working in this manner, was the sophistication of digital painting and the improvements in pen tablet technology. 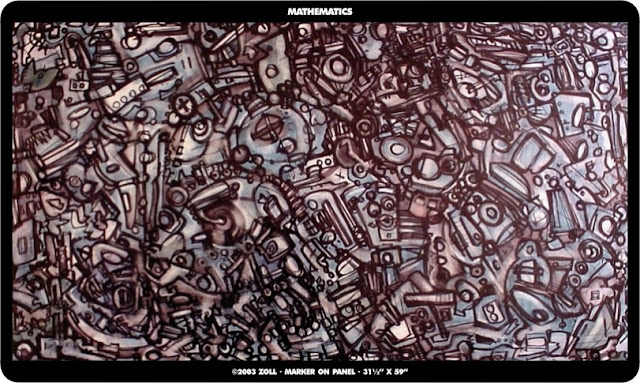