The surly antagonist stood with arms akimbo, feet square, and attitude firm. She had allowed a lot of money to flow through her purse to keep this sinking ship afloat. This was a battle not to be won by any man, much less her husband. How dare HE want to spend an additional thousand dollars on a french door refrigerator. Yet another role reversal for the antiquated paradigm.
She did not care how perfectly it would fit in the existing space. HE should have thought about that when laying out the new kitchen.
Okay, maybe the discussion wasn't this heated, it was a while a go. When you have been with someone for nearly two decades, you know when you are absolutely not going to win a battle. This was a loser and I needed to come up a solution for our new standard size refrigerator. 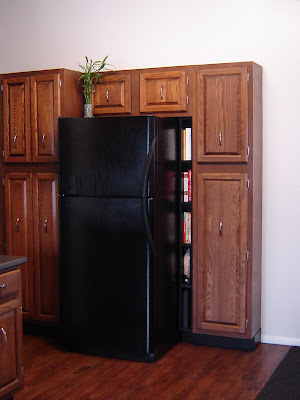 ﻿   The problem was that our house came with an ugly 1980's french door refrigerator, which is wider than a standard top and bottom fridge. We were able to reuse our kitchen cabinets after the remodel, but the width of the new fridge had been overlooked...ahem. I will admit that refrigerators are not sports cars, and it is hard to justify the nearly thousand dollar upcharge for a side-by-side. Especially when you are rehabbing and entire house on a legitimate budget.
With parameters in place and kitchen near completion, it was time to hit the drawing board. I could live with the extra depth of the standard size fridge, but the noticeable gap on the side was irritating. Keep in mind, I had already invested quite a bit of sweat equity into this kitchen.
After several sketches, I decided on a simple bookshelf made from 1" pine boards and painted to match the toe kick. These solutions always seem so obvious in hindsight, but this one was tough. Fortunately this also solved an another issue, and gave us storage for cookbooks.
Email ThisBlogThis!Share to TwitterShare to FacebookShare to Pinterest
Labels: DIY, Experimental, Home Improvement, Kitchen, Tips and Tricks