The Basement Ceiling Saga, Part One 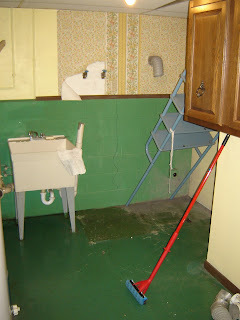 In a dark and secluded basement thirty-five years ago, orange shag was laid upon concrete. Walls were plied in the cheapest of dark paneling and the ceiling height was dropped by an entire foot to make way for a grid of acoustic tiles. This was the beginning of a horrible dank place. The carpet pad would breathe moisture for three decades and now emit the most unique funk. The massacre of taste concluded in wallpaper and a Crayola green laundry room.
Why? It is hard to say what psychotropic substances the builder had left in his system when he finished this epic masterpiece. I would say he was proud.
As time moved on, the property changed hands, but this special place was to be left untouched. Oh, there would be signs of battles that were won and lost. I, your protagonist, would find the entire drop ceiling littered with poison. Not a single container, but a Sam's Club quantity of diazinon. Apparently the only way to kill ants, is to kill every single living creature in the house.
Many years and loads to the dump remedied the Superfund site. This led to another blank canvas for the project guy. He would have to dig deep to come up with some of his most ingenious solutions.
Email ThisBlogThis!Share to TwitterShare to FacebookShare to Pinterest
Labels: DIY, Experimental, Home Improvement, The Basement Ceiling Saga